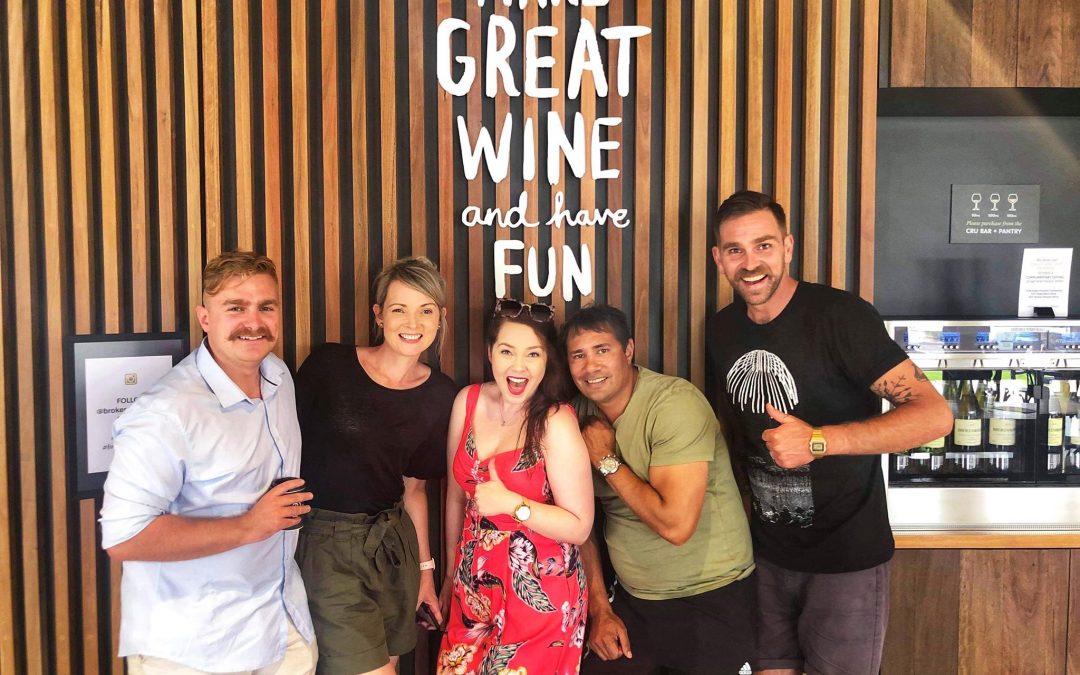 This was one of the most rewarding things I have ever done.

I knew it almost immediately.

I knew it before I had really taken stock of it all. Before I was sitting on my couch in Melbourne, eagle-eyed for the first promo on TV. Before the flurry of messages that confirmed that other people had seen the promo, too. And certainly, before watching the end result.

I knew it weeks earlier, as I waited to depart my short Taboo retreat and reconnect with my cancery reality the very next day. A smile sat squarely on my lips as I anticipated my boarding call and replayed the two days I had just had.

It was one of the most rewarding things I have ever done, just to sit in the company of three other people who face the same tedious chaos that I face on the daily. Just to watch the focus with which a comedic artist could sketch out his work in the midst of such taboo subject matter, with equal measures of defiance and kindness. Just to be immersed in the professionalism of a TV production team – this TV production team – so damn supportive, with a crystal-clear vision and an unwavering commitment to the end-effect of tolerance.

Sitting on my own, on my early afternoon flight back to Melbourne, on the eve of my fourth lung surgery, I thanked my cancer for yet again opening a door to opportunity and thanked myself for having the guts to walk through it.

The concept of Taboo is a relatively simple one: take four people from a marginalised group, place them together with a comedian in a remote location for a week, provide all parties with opportunities to talk and share and understand, and then ask the comedian to write a piece of comedy that captures and communicates the experience. The intended outcomes, of course, being empathy, growth, tolerance, learning and a laugh (hopefully more than one actually, comedian permitting).

It was a format that resonated with me instantly – I had nodded vigorously and chuckled and let out a discreet but nevertheless impassioned “yes!” following my first Taboo-related phone call. People who know me or have grown to understand me (especially recently) would appreciate that I am generally on the hunt for a positive lens to rosy-up any gloomy outlook. I would go as far as to suggest that I am genetically predisposed to carrying around my glass half-full. I have built a career around facing change – understanding it and using it to do better at work. And I have laughed, a lot, in the face of my cancer. Like, really, a serious amount of funny.

But actually, as it turns out, I just tend to laugh in general at life and its machinations.

Being diagnosed with a terminal illness is almost unspeakable in its tragedy. And if I was to sit in a vacuum, facing and replaying a terminal diagnosis, again and again, then yes, that would continue to be devastating and heartbreaking and soul destroying and not really a laughing matter at all. But a diagnosis is actually just a moment in time. It’s a milestone. And once it has passed, it is something that asks to be processed and understood. And somehow, eventually, evidently, woven into life.

I think a reality for many people is a lack of awareness of what ‘terminal’ actually is. Or perhaps, a preconceived notion that terminal is a label that must induce fear. Or even, tragically, an experience of death that has been so heartbreaking that it is not possible to consider an alternative perspective.

When it came to terminal disease, I fell squarely into an ill-informed, undereducated camp. Before cancer was mine, was part of me, I could only picture it as suffering and agony. A disease taking over my body, eating away at me as I rotted from the inside out. My frail and sad body not even a shadow of its former bright and nourished and spirited self.

My stage IV bowel cancer – by definition, statistically speaking, a terminal cancer – is a disease that I must manage. It is a disease that I am fighting to survive. But it is also a disease that allows me to thrive as my bright and nourished and spirited self. It is therefore as natural and normal for me to make light of my diagnosis as it is for me to jest and joke about the rest of my life. Because cancer is my life. It will forever be my life. There will always be that day I first fell in love, the day I gave birth, the day I received my tragic cancer diagnosis – but more importantly, there will be the life I live in love, the beautiful son we raise and every normal day I celebrate with my normal old cancer in tow.

I have been writing about my experience of my cancer since I was diagnosed, in March 2017. The feedback from people around me has been, without exception, positive. I have not had to feel the sting of a negative review and or the slap of an ill-informed comment, dished out without consideration for the consequences.

Instead, my online experience of me just living my life, for others to share, has been a delight. And importantly, something that has sustained my hopes and propped up my self-esteem and focused my energies further on the battle of my life – for my life.

But – I knew TV was going to be different. As soon as I was approached about Taboo, Tim and I discussed the impact of sharing our story – of course, for the good, but inevitably, with a fair whack of bad. I wish it didn’t have to be that way. But I knew it would be.

As I write this on the eve of the episode going to air in Australia, I have already got a sense of the response to Taboo. I have read some comments already. The support. The endorsement. The relief, that such a monumentally important subject is finally making its way into mainstream conversation. But of course, also, predictably, and I guess unavoidably, I have read the judgement. The assumptions. The mind-boggling obsession the digital world seems to have with outrage.

“This is disgusting”. Sigh.

It is nauseating how tempting it is to now burrow down the rabbit hole that is online bullying and the anguish that I feel when I read a comment like that. On the eve of finally viewing one of the most rewarding things I have ever done: a show that was created with my full consent and complete endorsement. And far more meaningfully, a show created by people I admire and respect, for their life-giving spirit and unperturbed positivity and unmistakable commitment to creating authentic stories. That is not disgusting. That is essential story telling. This is not an exploitation. This is an opportunity. But all of this and that is not for now. I will wait for the show to air and the responses to flow and we will regroup.

For now, I relish what we have. What has been created in Taboo. What I already know, without seeing it, to be compelling, important and engrossing real-life stuff. What I have learned about terminal illness and what I hope the rest of the country will come to learn also – terminal is not dead. Terminal is so much more than a label. Terminal is actually just life. And life can be damn funny.

The more you laugh

The more you fill with glee

And the more the glee

The more we’re a merrier we